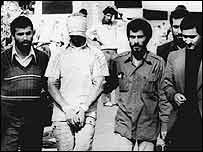 Ahmadinejad was a founder of the group of young activists who swarmed over the embassy wall and held the diplomats and embassy workers hostage for 444 days.

Somewhere in the BBC archives is the interview I recorded with him and his colleagues, long after the siege was over. They all seemed rather similar – quiet, polite, but with a burning zeal.

And now, contrary to almost every expectation except his own, Mahmoud Ahmadinejad has been elected president.

He is the first non-cleric to hold the job since Ayatollah Khomeini died in 1989, yet he is much more fundamentalist than either of the religious figures who have been in office since then.

Abroad, the Americans were the least surprised by the result. They assume anyway that Iran is a country seething with hatred for the US and determined to dominate the region by threat and undercover terrorism.

The British, French and Germans were the most taken aback, because they had previously argued that the Iranian government was basically pretty moderate and wanted to reach an accommodation with the West.

So now it seems as though the conservatives control not simply Iran‘s basic religious and political structure through the supreme religious leader, Ayatollah Khamenei, but also the government itself.

The gridlock between conservatives and reformers which has dominated Iranian politics since 1989 has finally been resolved.
Iran‘s rulers are now at one in their Islamic fundamentalism.

But is this really true? I somehow doubt it. Politics are far more fractured in Iran than in most Western countries, and expressions like “the conservatives” or “the reformists” have much less practical meaning in the Iranian Majlis than they would in Congress, the Commons, the Reichstag or the Chambre des Deputes.

Many Abadgaran members are like him: under 50, often from working-class backgrounds, intense, strong believers still in Ayatollah Khomeini’s revolution of 1978-9. They even dress alike, with their dark suits, their beards, their open-necked shirts. The differences with the establishment figures who support Ayatollah Khamenei are considerable.

There is nothing working-class about them; and (unless I am reading it very wrong) Ahmadinejad’s huge success in getting out the vote in the slums of south Tehran and elsewhere will have unsettled them.

The Khomeini revolution, back in 1978 and 1979, claimed to be acting in the interests of the poor against the wealthy and corrupt.

Still, the class divisions in Iran are as strong as ever. Few poor people have made it to the top in Iran – until now, that is.

Iranian politics are as complex and sophisticated as any I have observed around the world.

President Khatami, who wanted to open the country more to the West, never could. The gridlock always stopped him. President Ahmadinejad will certainly move in the opposite direction.

If his followers harass people in the streets, attacking men who shave and women who show their hair, wear make-up and bright colours, there will be much greater social tension and the possibility of future violence.

The implications of this will be worrying to the religious leadership. It is the better-off in Iran who usually want to follow Western styles. And although Ayatollah Khamenei is a religious conservative, he will not want class warfare breaking out in the streets.

So although President Ahmadinejad won a sizeable majority last Friday, he will not necessarily be able to do what he wants.